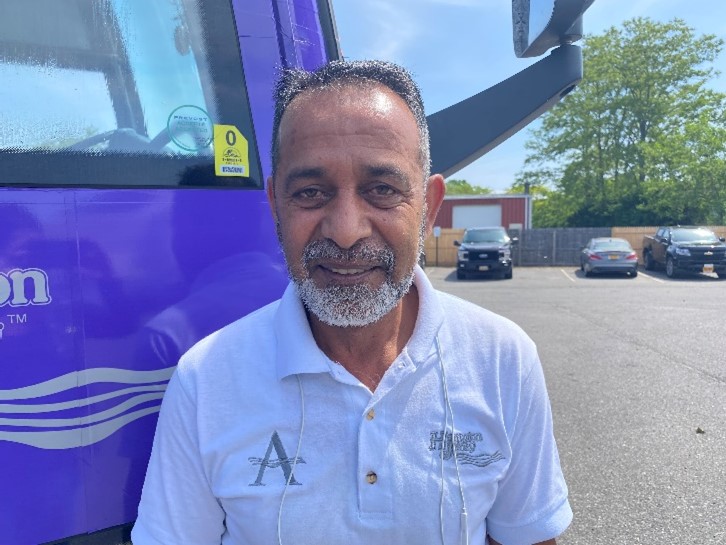 The Motorcoach Driver of the Year award recognizes an individual who has gone above and beyond the performance of his or her duties as an Over-The-Road Motorcoach Driver, professionally executing safe motorcoach operation, while providing the traveling public with the safest form of passenger transportation in the United States.

Mohammad “Raja” Ishtiaq of Riverhead, N.Y., was selected from among numerous qualified nominees from across the country as the 2021 Motorcoach Driver of the Year. Click here to view the award criteria. With nearly 3 million miles logged in his career, Ishtiaq is known for his driving skill as well as his considerable customer service.

“Motorcoach drivers are the face and backbone of our industry,” said ABA President & CEO Peter Pantuso. “They deliver millions of passengers safely each year to their destinations providing top notch customer service. They are truly the representatives of our member companies and the industry. People always remember their driver and the experience they had with them on a trip. We are happy to not only recognize a deserving driver annually, but particularly in a time when driver recruitment and retention is such a challenge, we have put out new resources to help in that battle. Hopefully this award, is just one more visible incentive to help a company along the way to recruiting quality drivers.”

Hampton Jitney Vice President Andrew Lynch called his driving record “unmatched” over the company’s 45-year history and noted that “[Raja’s career] is a track record of not only skill and safety in the driver’s seat, but of courtesy and caring towards our customers that has repeatedly been recognized by our ridership.”

Company President Geoff Lynch nominated Ishtiaq for the award because of his professionalism, dedication, extensive driving skills and knowledge of the industry.

“Raja has been a resource to everyone in our organization,” Lynch said. “He’s been involved with our driver training program for more than 20 years, serves as a mentor to all our other drivers, is a 19A certified observer and is the driver called to handle any type of difficult maneuver. He has even been called on by other companies to help navigate New York City. One time, a visiting company had an articulated bus in town, and they needed the best driver in the city to help them out of a jam, so they asked for Raja.”

The award was announced during a virtual ceremony held June 15 online, a formal presentation will take place at the annual ABA Marketplace event on January 10, 2022, during the largest gathering of motorcoach operators in North America. Over the course of his career, Raja has earned received every single annual safe driving award there is at Hampton Jitney, since 1991. Click here to watch the recording.

Paul Withrow, COO, said, “Raja Ishtiaq is a remarkable person. He displays a blend of charisma, professionalism, and humility while being compassionate, humorous, and gracious. These qualities have assisted Raja being our model driver, our lead driver trainer, and our motorcoach operator of passenger preference for tours, charters, and line haul operations alike. Raja possess the ability to balance a Swiss like mindfulness of the schedule while not projecting impatience to our passengers. His high level of service in the most populous city in our country is one reason we are who we are as a company. Raja is my definition of service.”

The award is sponsored by Motor Coach Industries (MCI) to honor the people who make the industry run.

Hampton Jitney is a pioneer in the transportation field. In 1974, Hampton Jitney started with one van and a commitment to providing the finest personalized transportation service between Eastern Long Island and Metropolitan New York. Building on that simple premise, Hampton Jitney now operates a fleet of luxury motor coaches. Line run service operates 365 days a year between Eastern Long Island and Metro New York (including the airports). In addition, Hampton Jitney limousines, charters and tour coaches operate regularly throughout the northeastern US and Canada. For more information, visit www.hamptonjitney.com.