The American Bus Association Foundation is pleased to announce the 2016 George T. Snyder Jr. Scholarship winners. The program recognizes deserving students who demonstrate scholastic ability, character, diversity, and the potential to be future leaders in transportation, travel, and tourism.

The program was established in 1997 after Mr. Snyder’s death in 1995. He had a deep and lifelong interest in the well-being of all people, especially when it came to advancing the educational opportunities for young people. Since his entire professional career was spent in the bus industry, his friends and family believed that a scholarship program would be an appropriate way to honor him and to celebrate his life. This is the 19th year of the program, which has now awarded more than $790,000 dollars in scholarships to college students of motorcoach, travel and tourism industry families.

Ashley McMullen, whose father works for LaQuinta Inn & Suites, was selected as the winner of the $10,000 “Driving the Future” scholarship. The other 20 student scholars will be presented with $2,500 awards.

“For 19 years the ABA Foundation’s George T. Snyder, Jr. scholarship program has helped hundreds of deserving young people pay for their college education. This year the ABA Foundation reached a milestone with nearly $800,000 in giving. It’s also the second year we are administering the Yellow Ribbon Scholarship, which focuses on expanding the number of traditionally under-represented groups in management and operations of the motorcoach, travel, and tourism industry. It also pays tribute to the men and women who served in our armed forces, wounded veterans and the families that support them,” said ABA Foundation Chairman Doug Anderson.

The ABA Foundation is the largest nonprofit organization in the group travel industry, with an emphasis on research and scholarships. 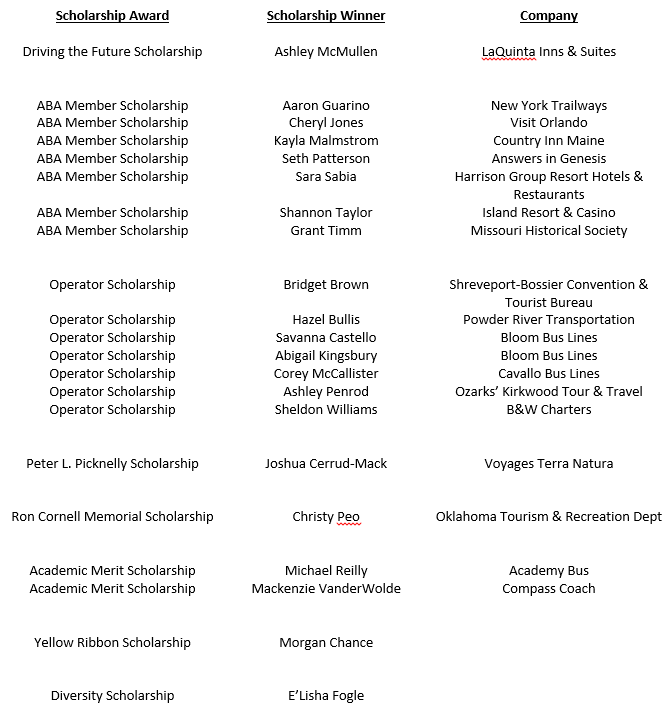 The American Bus Association Foundation (ABAF) is the scholarship and research arm of the motorcoach, tour, and travel industry. The largest non-profit in motorcoach group travel, the ABAF distributes $60,000 a year in scholarships to industry families and invests in research to demonstrate the important role motorcoach transportation plays in society.